Born in Huddersfield West Yorkshire, Dave Oxley possesses an unmistakable, unique and passionate voice. Dave was raised with his brothers and sisters in the northern mill town of Halifax, West Yorkshire. The family shared a three bedroomed house on the run-down estate of Southoram, an estate that had been featured in the local press and had been described as a "Shanty town".

At the tender age of thirteen, he formed a band at the local youth club, which never got a name let alone a gig! He then joined a hippy band at the age of sixteen and played several college and uni gigs, after rehearsing hard for the local collage's end of year gig, last-minute arguments over fees (and the fact that Dave's girlfriend was treasurer) lost them the gig. They were placed by "Son of a Bitch" who later went on to become "Saxon".

Married at seventeen with two sons by the time he was nineteen, he found his childhood dream of becoming a famous musician was put on hold. Feeling stilted and frustrated he found an outlet by playing at any festival he could get to and spent many a cold northern winters day busking out on the streets to earn extra money.

In his twenties, long hard nights followed, playing in working men's clubs in between the strippers and bingo. Long days in the mill and late nights on the road took their toll, and the band folded and so it was back to songwriting and busking.

Dave has had some success with his three-piece rock and blues band "the Dead Dogs" creating a good strong local following, and supporting bans over from America. The Dogs were offered a tour of Holland and Germany, but family commitments and conflicting musical interests led to arguments that caused bitter rifts between the band members. The tour never happened and shortly afterwards the band split, so it was "back to busking".

When at a Martyn Joseph concert in 97/98 Dave was sitting in the audience singing harmonies to many of Martyn's songs, and in an embarrassing moment, Martyn Joseph stopped playing and in front of nearly two thousand people, asked who was singing. He brought Dave on stage after singing a few numbers together. Dave was invited back the following night to repeat the performance.

Soon after he travelled and settled down in Bali, Indonesia where he found work in bars and more notably spent nights singing in the Hard Rock Cafe and hotel on Kuta Beach.

After living in Thailand for a while, a family bereavement brought him back to England and back to busking. It wasn't long before the music pumping through his veins drove him to form the dow "Oxley and Holmes", which rapidly grew in popularity and became known as the band to have at your festival. With popularity and demand increasing, they made the difficult decision to pick up and take their talents to Spain. It proved to be a difficult path and due to differing commitments within the duo, Dave has decided to pursue his solo career and keep alive his childhood dream. 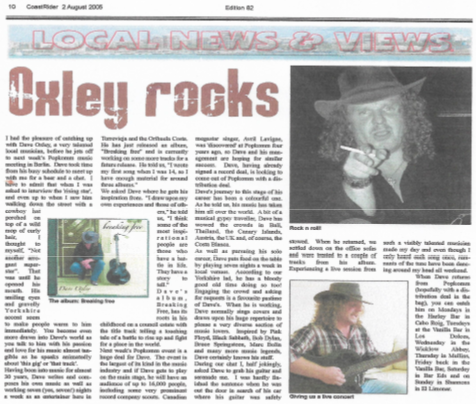 Dave's music is not "made up". It is gritty and reflects a true portrayal of life through his eyes, a truth that seems to have a common touch, and the ability to reach people of all ages and backgrounds. The raw passion and the ability to write about everyday life is astounding, and more importantly, the way he is able to convert it to song and still keep the originality of his words intact is even more astounding.

Mosa Records teamed up with Dave Oxley to copyright and promote his song and video for "With You I can Make It". 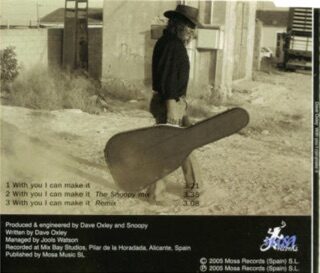 With You I Can Make It