PHILIP CHEVRON was previously lead singer, guitarist and songwriter with the RADIATORS (From Space), whose second album, the 1978 recorded “GHOSTOWN” is now widely acceptable as the finest record ever made by an Irish band. He has also composed two musicals for the Dublin Theater Festival, most notably the 1979 hit production “The HAPENNY PLACE”. But he began his career in 1995, when, straight from school, he produced an album of Brecht/Weill songs for Berlin-born AGNES BERNELLE. His love of the Berlin  and Munich Cabaret  and Theater songs of the ’20’s and ’30’s persisted throughout his five years with Radiators (his record collection now includes almost 100 LPs of the genre, most of them extremely rare) but it has taken up until now for him to finally agree to commit his own interpretations to vinyl.

Chevron is best known for his work playing guitar, banjo and mandolin with "The Pogues", but in the mid-1970s Philip became mesmerized by the blossoming punk movement and he joined Ireland's first punk band "The Radiators From Space".

Philip joined the Pogues to play banjo replacing Jem Finer for a while, but he stayed in the band because Shane didn't want to play guitar anymore. Chevron has also played with Mary Coughlan and did a solo version of "Thousands Are Sailing" for the soundtrack to a BBC documentary about Irish music called "Bringing It All Back Home". He left The Pogues in 1994 because he wanted to get back to more traditional Irish music. 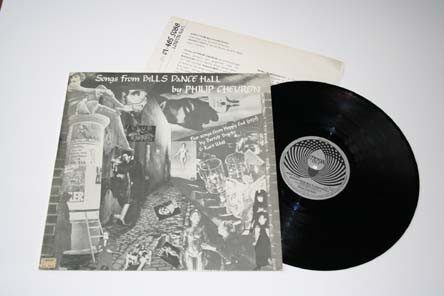